Plunderphonics is any music made by taking one or more existing audio recordings and altering them in some way to make a new composition. The term was coined by composer John Oswald in 1985 in his essay Plunderphonics, or Audio Piracy as a Compositional Prerogative. Plunderphonics can be considered a form of sound collage. Oswald has described it as a referential and self-conscious practice which interrogates notions of originality and identity.

Although the concept of plunderphonics is seemingly broad, in practice there are many common themes used in what is normally called plunderphonic music. This includes heavy sampling of educational films of the 1950s, news reports, radio shows, or anything with trained vocal announcers. Oswald's contributions to this genre rarely used these materials, the exception being his rap-like 1975 track "Power."

The process of sampling other sources is found in various genres (notably hip-hop and especially turntablism), but in plunderphonic works the sampled material is often the only sound used. These samples are usually uncleared, and sometimes result in legal action being taken due to copyright infringement. Some plunderphonic artists use their work to protest what they consider to be overly-restrictive copyright laws. Many plunderphonic artists claim their use of other artists' materials falls under the fair use doctrine.

A development of the process is when creative musicians plunder an original track and overlay new material and sounds on top until the original piece is masked and then removed, though often using scales and beat. It is a studio based technique used by such groups as the American experimental band The Residents (who used Beatles tracks) and the UK band The Perrinormal (who have plundered many tracks from classical, folk, rock and jazz but rarely reveal which). Often the new track has little resemblance to the original, making it a derivative work and thus freeing the musician from copyright issues. 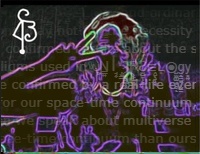