We run #promotional #stuff and ads and we use brand new kind of #homemade #monetization methods, so without #anonymous #contribution from unknows and well know sources like we use to get since many years we simply wouldn't be here right now.

#thegame23 is both fun and serious at the same time,

it was created and funded by #secret actions of #collaborative people around 15 years ago from everywhere on this planet.


We now thank you for supporting us and thank you to watch our ass while we watch your back.

You can #donate directly using Bitcoin or if you'd prefer another method (PayPal, AltCrypto) you can join our Discord Communities here :


there you can ask our staff for further information ... just pm tha boss


All confirmed donors of minimum 1$ get access to many #exclusives lounges and secret chatrooms and get VIP section inside the 'DMZ' called the "No man's land", you will understand more once you will be inside our discord community and on our nodal network made of many social platforms...

The whole list of our sites is keep secret for the moment.


Alternatively, you will be able to buy an awesome shirt, hoodie, or mug or any useless thing from our promotional campaign going on and make all your friend deeply jealous....fuck yeah!!!


To reply #thegame23 IRL #worldwide in any time you can text thoses 2 phone numbers and expect answer really if we feel willing for it!

you can leave us a message here if we crash ours servers because of a fucking blackhat and/or disappear from the whole map ...or from this #funking #shitty #reality....


All proceed donations and contributions to our #fake #true #propagandas and #conspiracy go directly to supporting #thegame23 master #pysops.


Be aware about many secret child operation for humanity salvation and protection.

Visit us as soon as you can. #everyone for #everything....

We are always online and we are #everywhere...


You can also donate to #TheGame23 sub-project Cosmic Liminality

“Media culture enthusiasts like “Bill Me Tuesday,” a hacker from Santa Cruz, want computer users to think of viruses more positively. Using a healing medical model, Tuesday explains: “Viruses can act like a logic analyzer. As the virus goes through the operating system, it stops at certain checkpoints, doing its rounds in a given amount of time. This checkpoint will report back what the condition is.… Essentially the virus will serve as a means of creating a self-repairing system.… The goal is a self-repairing, crash resistant system, similar to the way our bodies repair themselves. Biologically we are the product of thousands of microorganisms cooperating together. We can apply that kind of thinking in the computer world. We are modifying the concept of a virus to serve us.”

These are the same goals and methods the media viralists have. Presenting culture as a giant, interconnected organism, they hope to foster a spirit of cooperation. Using viruses to seek out the cracks or inconsistencies in existing systems, they develop a culture that repairs itself much in the way a colony of bacteria mutate to avoid extinction or an ecosystem adjusts itself to achieve homeostasis. This concept has gone far beyond the metaphorical level.

A new kind of computer virus has been appearing on the networks that does not have anything to do with programming language or crashing systems. These viruses are meant to serve as memetic devices or meme-carriers, which express themselves in the way they mutate passing from system to system, node to node. They work like the kids’ game “telephone,” where a message is passed around and the joy is in discovering how the message changed from person to person. When the message is a virus, though, its contents are hoped to evoke a response.

A college student on the Internet, Andy Hawks, created a meme collection he called “Futureculture.” In its first incarnation, Futureculture was a large list of books, tapes, programs, Internet sites, magazines, and other media references that Hawks felt would be useful to people who were interested in developing a new viral culture based on some of the principles of cyberspace. He posted it as a file in several Internet locations so that others could reference it, make additions, and pass it further. So much interest developed in Futureculture that it grew into an open E-mail forum. Hundreds of Internet users sent mail to one another through an automatic mailing system at Hawks’s Internet site. Each user received a daily compilation of all the Futureculture list additions and periodic updates of the whole, mutated file, which had expanded to several hundred pages of text. Eventually Futureculture, which began as a virus, released viruses of its own.

(…) The virus served as publicity for a new meme-zine, Virus 23, which features interviews with and articles by science fiction, psychedelic, physics, GenX, mathematics, and computer experts. The zine is designed to promote viral initiatives. Following the philosophies of William Burroughs and cult hero Genesis P-Orridge, the editors see language and culture as a series of competing viruses and believe that an uncensored forum for sometimes shocking countercultural ideas will strengthen the ability of new memes to evolve humanity. They use the number 23, made famous by occultist Aleister Crowley in the early 1900s and, more currently, P-Orridge because ancient pagan faiths associate it with change and the Apocalypse. Self-conscious and overtly viral manifestos take us into an altogether new cultural territory, where the memes of ancient shamanism are spliced together with those of futuristic cyber-technologies. This is the frontier of virus construction, and though it occurs on a highly conceptual plane it often has very palpable results.”

via Futureculture, from Media Virus: Hidden Agendas In Popular Culture

The Original # TheGame23 by Anonymous

# THEGAME23 IS A DANGEROUS CULT!

The Game of Life - Timothy Leary with Robert Anton Wilson

How to become a meme god - by Brian Vereschagin

- Play with the Manipulation of Living Symbols

Creating meta-narratives as a hypersigil within a larger ARG scenario, for personal and societal transformation - by ARGO - Alternate Reality Game Organization

Metagame: A Proposal for Collaborative Construction of a Sacred Science

#TheGame23 is the border of the reality, one more step, and you will not know what is real or what is fiction anymore. 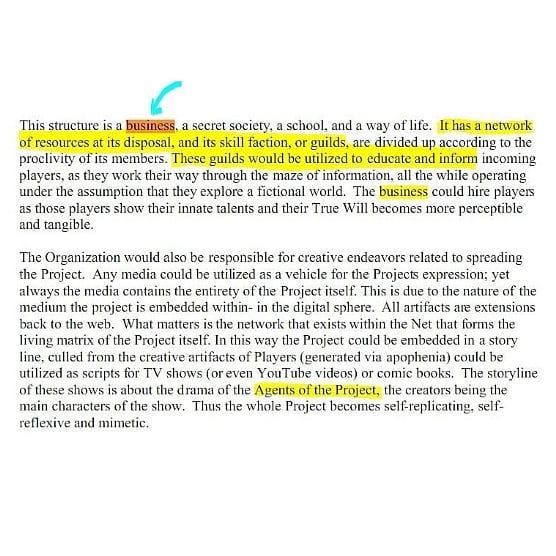 In this game "there are no rules, unless you want to create them!"

Here are some creations:

The Original # TheGame23 by Anonymous

THEGAME23 IS A DANGEROUS CULT!

- Creating meta-narratives as a hypersigil within a larger ARG scenario, for personal and societal transformation - by ARGO - Alternate Reality Game Organization

- Metagame: A Proposal for Collaborative Construction of a Sacred Science

In a World Run by Algorithms, Weirdness Is Our Best Weapon - Douglas Rushkoff

Are you playing the game or is the game playing you?

The Game of Life - Timothy Leary with Robert Anton Wilson

Metaphors we believe by: the pantheon of 2019 - Aaron Z. Lewis

How to become a meme god - by Brian Vereschagin

- Play with the Manipulation of Living Symbols

Escaping the Matrix On All Levels

- The “IS” As Quantum Harmonic Oscillator: (In A Memetic Cosmology, Where And What Are The Aliens?)

The Omniquery Initiative — How To Save The Universe — an incomplete tutorial

"It would be naive to think you just play #TheGame23. #TheGame23 also plays you in the high art of #fnords and Elegant Synchronicity. Only when you realize the confusion, the beauty, the absurdity and the insights of #TheGame23 are mirrors of your own inner nature, only then will you come to truly see the fnords. Eventually it has to get pointed out....how many fnords do you need to see beyond the veil?"

News from Wonderland - Updates from the game