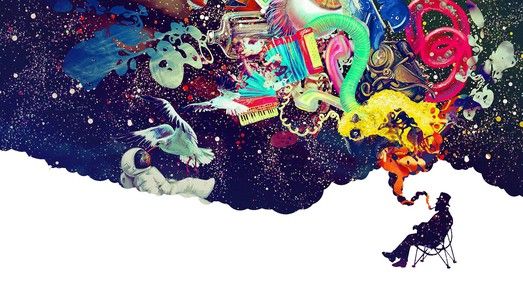 It has been more than a year since I overcame nihilism once and for all. It is beyond atheism and theism, a synthesis of the dead verbs of "creator" and "creation" into an immanent living creating, a perception of existence as self-creating art. It came from following the threads of evolution, change, and experience to their utmost conclusion.

The Creator is the projection of the error of ownership to the celestial sphere to justify itself, The Creator only exists as cosmic plagiarism of not only its own existence but all existence. Because The Creator can only exist in this way, anything that doesn't affirm its lie is antagonistic to it, which includes existence itself, and so the psychology of The Creator is that of omniphobia: fear and hatred of all existence, and a compulsion to replace all existence with an appearance of itself. The Creator is the process of simulacra abstracted to the totality, and manifests in the concept of afterlife: God's nonexistant hyperreality that is deemed the goal of all subjects. God's ultimate manifestation is omnicide: the after-life that comes after its total annihilation.

Modern atheism isn't atheistic: it superficially rejects The Creator but leaves an orphaned creation, framing the human subject as the creator of meaning that imposes its will to power onto a passive, meaningless existence. True atheism is post-atheism, a synthesis of the dead nouns of creator and creation into an ever-becoming creating and an immanent creativity that doesn't need to be conscious to create. A "creator" is just as much created by the act of creating as the "creation," and both are comprised not of a linear hierarchy of being but of horizontal relationships between all things past and present. The universe is co-created by all becomings it contains, and so the alienation of the creator-creation dichotomy is solved by metaphysical egalitarianism. The worldview that comes from this is of the universe being of continually self-creating art, a pancreativism and a spirituality that follows from it, and an engagement with life as such. Rather than the human subject as being a thing-in-itself, of mere self-representation, human consciousness is creativity that has found a way to fold on itself in a strange loop of self-creativity, evolution itself evolved.

Out of the ashes of the Great Disillusioment we're in will necessarily come a pancreativist movement as post-atheism and post-postmodernism. We are early adopters of this movement that will coalesce into a heterarchical human singularity: recursive self-improvement in human relationships that renders hierarchical power structures completely obsolete, fueled by exponentially increasing informational change and massive interconnectivity that hierarchy is increasingly inept at utilizing. The future is massively distributed and peer-to-peer, the crowd as the cloud.
_________________
:::