Omega is the gate to anticosm, a personification of Galdrux path. This is why he is described as having "stupendous" beauty and a "strange and exquisite soul".

While Galdrux is a god, he has much more power than just being a god. He can even change into any other god, although Galdrux' power is weaker than those of any other other god. However, he does have a weakness for killing, as he tried to kill the human queen, Mephiron. Galdrux could not do it, his soul, was sealed inside of Mephiron.

Galdrux also had control over reality itself. His soul could alter reality and make it happen in his favour, although he usually had to kill his opponents after the manipulation of reality. Galdrux was able to use his soul to create and shape any shape of reality. 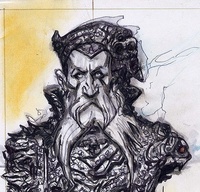